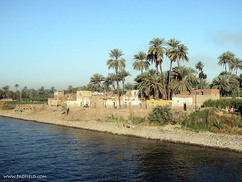 The Importance of the Nile River

The Nile River is regarded by many as the single most important factor in the history of Egypt. It is considered an oasis providing relief in a vast desert. The Nile since 5000 BC has provided Egypt and its people with fish, seafood and fresh water.

Without the river, Egypt would not be able to provide human habitation. From 6000 BC numerous communities of hunter-gatherers made the Nile territory their permanent residence. With the flowing of the water and the rich moist soil the Nile was an ideal place for human development. By 3100 BC, communities along the Nile had become prosperous, stable and were eventually united into a single political unit, the first Egyptian Dynasty.

Before the Old Kingdom came the first dynasty from c. 3100 BC. Upper and Lower Egypt unified into one kingdom and this is marked by many ancient Egyptians as the beginning of their civilization. Lower Egypt includes the extensive delta of the river, where it separates into many divisions before flowing into the Mediterranean. Upper Egypt is the long channel of river that takes boats as far upstream as it can up to the first waterfall or cataract. King Narmer, also known as Menes (founder), was said to be the man to combine Upper and Lower Egypt. He founded the first capital of Egypt, Memphis, where both land from the Upper and Lower kingdoms met.